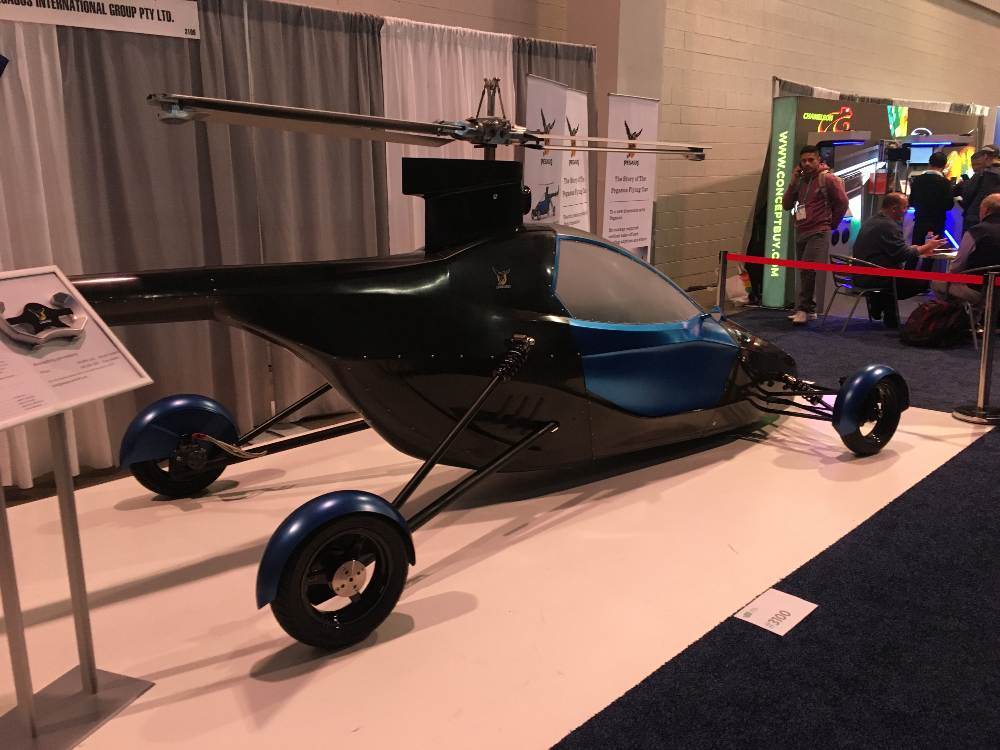 The newest model of the Pegasus flying car.

You’d think that a half-car/half-helicopter would be the last thing to blend into the background, but you could have easily missed the “Pegasus E-Class” if you were caught up in the usual flash and spectacle of CES — the popular consumer electronics show held annually in Las Vegas.

In the farthest corner of the Las Vegas Convention Center’s North Hall this week, the flying car and two members of the Pegasus International team were quiet and taking up a small amount of convention space — a surprise, considering how few companies have successfully created a technology that achieves vertical takeoff and landing.

A flying car, also known as a rotable aircraft, is something that inventors have been dreaming about for a very long time. Stuck in traffic? Just take-off and get out of there.

That’s the idea, according to Jacky Young, General Manager at the Australia-based Pegasus International.

“Drive it out of your garage, and then you can take it out and fly it wherever you want,” Young told me at CES 2020 this week.

The Pegasus has a helicopter-like configuration, and the aircraft's selling point is that the transition between driving and flying is automatic.

“It takes one button and about six seconds to complete,” said Young. “You press the button, and you’re almost ready to take off.”

Other flying-car companies have a manual transmission, or can take over a minute to initiate, said Young. After you land, you press a button, and you can drive it back onto the road again.

But how do you operate this thing? Who is expected to use it the most? Is the technology more of a helicopter that drives or a car that flies?

From his corner booth, Young spoke with me about the future he envisions for flying cars.


Tech Briefs: How do you envision Pegasus being used, both in the near-term and the long-term?

Jacky Young: The ultimate goal, of course, is to take off and land wherever and whenever you want. At the moment, you have to drive to an open space, like a lawn, to take off and land. Ultimately, Pegasus is a flying car where you can drive on the highway and take off at any time you want, to get out of the traffic congestion. We just had the FAA regulator come here to visit, and he literally said he does not see anything that does not comply with the regulations.

Tech Briefs: Who do you believe will use a flying car?

Jacky Young: At the very start, I believe the personal Pegasus flying car will be for CEOs or management-level personnel who just want to get out of traffic. And, actually, a lot of them already know how to fly a helicopter. Pegasus is almost exactly the same controls. They are able to almost use it straight away and then take off to the office. This is the very, very first case scenario, and after that it will be more generalized.

Tech Briefs: What is your favorite aspect of the design?

Jacky Young: The front end is a very conventional front drive system. The rear drive is very, very special. It’s a swing-arm system, which takes all the landing load and the take-off load extremely well. This is where the innovation is, because a flying car can’t be all conventional. The innovation is in the drive and the transition time.

The front end of Pegasus

Tech Briefs: What inspired this idea? How did Pegasus come about?

Jacky Young: The company began in 2009. Essentially, everyone was just sick of traffic jams, even back then. The idea of flying cars comes up in movies and news reports all the time as a kind of dream idea. We said, “Let’s try to do something like that.”

We have worked on some other versions as well, but [for those early versions] we needed a runway. Other flying car companies need a runway. We think vertical takeoff and landing is the most crucial part for a real flying car, so that’s what we produced.

Tech Briefs: What needs to happen before Pegasus is used in a mainstream way?

Jacky Young: At the moment, it will be somewhat exclusive. The production cost and the pricing is around $330,000 for a single-seat version and $400,000 for a two-seat version. We have an 11-seater which we can use like Uber taxi, a kind of Pegasus Air Taxi. Then, that’s something that everyone can use all the time, because it really does save a lot of money and time when it comes to transportation.

Jacky Young: Essentially, we tested it as a chassis first, without a body. Of course, it was very, very exciting. It was a proof of concept and everything worked brilliantly. It was very stable and very nimble, and in the tight spaces even.

It performed extremely well on the road too. We took it to a go-cart track to do some testing, and it handled really, really well. The turning radius was more than good enough for any household use, so you can park it into a garage or in any car spots.

Tech Briefs: What kind of expertise is needed to operate this?

Tech Briefs: Are there any complications with regulations?

Jacky Young: Essentially when you design something, you build it towards a framework. For example, the FAA has a framework for rotorcraft, and that’s what we built ours towards. Otherwise it takes too long to build something out of the framework, which especially in the United States, is very difficult.

On the road, it’s much simpler, as long as it drives and has standard safety features.

Tech Briefs: What is most exciting to you about Pegasus and what it can do?

Jacky Young: It really can be a household [technology]. Vertical takeoff and landing allows anyone to have it. You don’t need to drive to a runway. You don’t need to land on a runway. Having a Pegasus flying car allows you to get out of traffic and go anywhere much cheaper and much faster.

Tech Briefs: And you’ve flown this?

Jacky Young: I have. It’s a very, very proper machine.

What do you think about flying cars? Would you want to fly one? Share your questions and comments below.